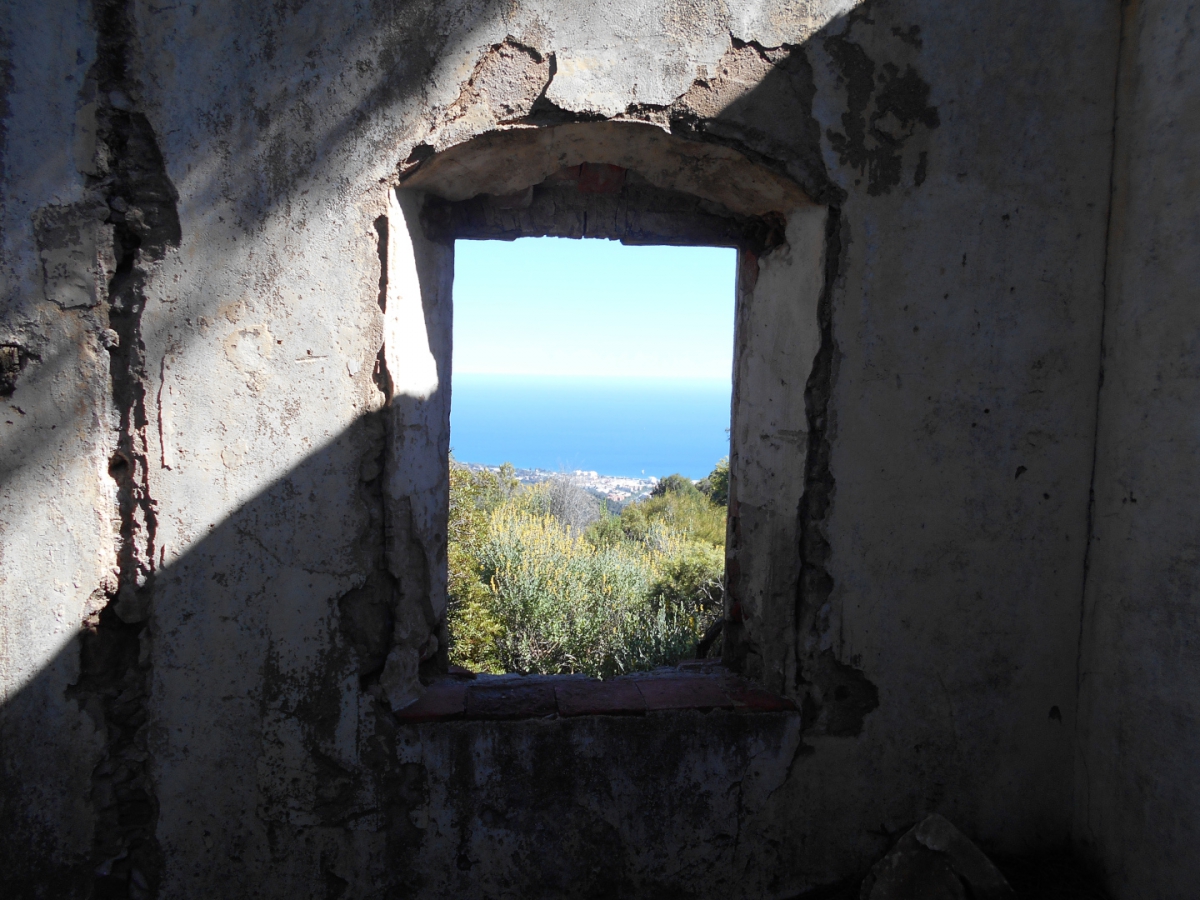 This trail begins at the initial information board in the Carril de la Vía (55). Take the road that ascend to the area known as Puerto Rico Bajo (56). The road becomes a lane with a chain preventing access to vehicles. Continue along this lane and about 300   metres in you will find signpost (57). Go onwards towards Puerto Rico Alto looking for the next post.

Continue along the lane and 400 metres in you will find the Fuente Nuestra Señora de la Paz spring   (58)    on the right. A little further up, the lane forks and you should continue on the right-hand path until you find a signpost that indicates the path that goes to the right. The road begins to climb the slope and takes you to the travertine gorge, that we see from the front; this formation is known as the Puerto Rico shelters.

The trail sharply zig zags upwards at this point until it reaches a tanker (white hut) that channels the Puerto Rico Alto spring. On the travertine gorge you will find a plateau known as Puerto Rico Alto. At this point you should see the ruins of the Casa de la Finca and an abandoned plantation of fruit trees. Here, you will find another signpost (59) that indicates the correct path to Juanar, leaving the path of Ojén to the right.

A few metres later we find the dry riverbed at the source of Puerto Rico Alto (60), continue north towards Juanar leaving the Puerto de las Pitas mountain pass to the left. We continue    ascending to the next signpost (61). Take the path that goes to the left and descends to the arroyo de la Barbacana stream. Once you have crossed the stream there is a steep ascent to the ruins of Casa del Guarda (15). About 150 metres after the Casa del Guarda, the path forks in two, in the area known as the Arenal Casa del Guarda (16). Here, you will find a signpost where you should turn left, towards Calaña.

On this section the path descends to the Laja gorge and then goes up to the Puerto de la Adelfilla mountain pass (17), and from there, descends until you reach the Arroyo de las Carihuelas stream, where you should turn left.

Continue downhill to the Arroyo de las Carihuelas stream until it meets the arroyo Calaña stream. At this point, you will find signpost   (18)   and from here, you can ascend to the Fuente Calaña spring (19), which normally has water until early summer.

Continue downwards towards Marbella for about 400 metres along the same stream, until you find the Vereda de los Cazadores route on the left. At this point, you must be careful not to continue down the stream. Leave the stream and continue until you find the next signpost (20). From here, take the Vereda de los Cazadores route towards signpost (21). Once At the crossroads we follow the path on the right, always descending and, after about 200 meters, you will reach the Ermita de los Monjes 2 signpost (22). There, cross arroyo Los Monjes stream, to reach the Ermita de los Monjes hermitage (77). In the ruins of the  hermitage, you will find another signpost, which indicates     Marbella to the south. On the first descend after reaching the ruins of the Ermita de los Monjes hermitage you will see an Aleppo pine on your right with an impressive appearance.

After leaving behind the Aleppo pine, the path continues to  descend little by little and, at several points, requires you to cross the river bed. Be careful not to lost the path in the places where you have to cross.

Once you reach signpost (23), continue on the right until you reach a plain with a small pine forest. In this section, you will find two paths, one that continues by the hillside and another that runs down parallel to the stream. These join together a little further on. If you choose to go down to the stream you can visit some pools where you can bathe if weather permits.

Continue along the path parallel to the stream, until you reach a bifurcation in the path that you will take to the left, and a few meters later it approaches to the stream to cross the last stretch of rock, that you must go around on the left side. A few metres in, the path will appear again, clearly signposted.

Turn left at the signpost (24) and cross the arroyo Los Monjes stream. The trail ends at Sendero Los Monjes      (25), just above Xarblanca school, where there is one of the four trail start panels that are located along the southern face of Sierra Blanca.

*Informative Note: This route beginning and ending at the initial information board Carril de la Vía would become circular. By the end, after turning left at the crossroads Vereda de los Cazadores (20)    and continuing along the path on the left after the crossroads of the Rozá de las Pitas (27). You will connect with the Vereda del Faro route in Puerto de las Pitas (38) .This is approximately 9.1 km long.