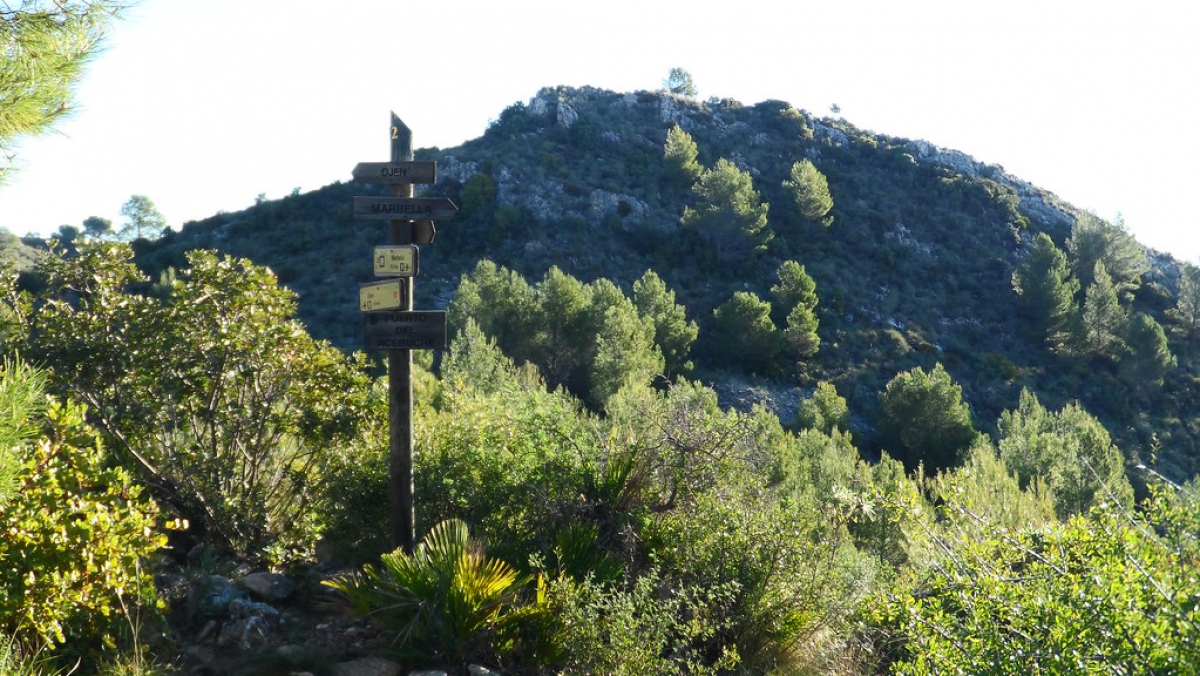 The route begins at the mouth of the Arroyo Guadalpín stream and ascends near to the Palacio de Congresos. A short journey next to the Ramón Gómez de la Serna Street takes you across Ricardo Soriano Avenue and you will head north-west along Avenida Jaime de Mora and Aragón. About 800 metres in, you will cross the AP-7 motorway. At the roundabout aftern the  motorway, turn left onto the long Buchinger Avenue. This     ascends north-west and becomes Albinoni Street, which leads to the disused quarry that has been converted into the Nagüeles Auditorium.

After about 3.5 km you will see two large stones on the right of the path and a sign indicating the start of the Sierra Blanca path, Pinar de Nagüeles (73). Go onto this battered lane between slim Aleppo pine trees with carob trees and olive trees. Leave the Concha gorge on the left. The track has numerous branches, but you should follow the central one, which ends up becoming a path. You will climb decidedly through the Encinas gorge to Vereda de Buenavista crossroads (74). Here, turn right and go down a small section, cross the Piedras stream and go upwards to the Pilones mountain pass, where there are many beehives. Another descent and a subsequent ascent will lead you to    conquer the Mochileros mountain pass. A third descent leads to La cañada de la Rana crossroads (76). The route that goes south leads to Marbella, to the Cascada de Camoján neighbourhood, whilst the one on the left is the Great Malaga Path, which ascends the Janta gorge, one of the richest areas in vegetation due to its shade. Here is the first important climb, the Camoján mountain pass (km 5.4), which is a beautiful observation point. To the east, in the direction of the route, you can see the Calaña gorge where the hermitage is and the Juanar Cross on the    horizon. To the south, you can see the Bay of Marbella in all its splendour with the Strait of Gibraltar, the Rock of Gibraltar and the North African Rif coast all visible on clear days.

You will then make a slight descent towards the north, on a  hillside that was affected by fire where esparto grass fields   thrive. In contrast, the valley floor is covered by a dense pine forest. To get there, you have to take a somewhat complicated route that has rope handrails and then you will reach the Hermitage of the Monks (Ermita de los Monjes) (77) (kilometre 6.5). There is very little left of the building, but the individual rooms are somewhat distinguishable, thanks to the cleaning done by volunteers both on the building and the access roads. After crossing the Calaña stream, take the right path on the next signpost (22). The second important ascent leads to the Puerto de la Cruz mountain pass (36). Still overlooking the Monjes gorge, the path ascends to the north along the western slope of the ridge, leaving behind the Puerto de la Cruz crossroads (35) until reaching a new crossroads, located in the Puerto de las Pitas mountain pass (38) (km 7.5), which is also identified by a sign. You must turn to the east and descend to the Laja stream and then ascend to the Puerto del Pino mountain pass (37), another exceptional vantage point.

During the steep descent, you can see the area of Rico Alto mountain pass with its neat grove, the reddish cut from the front of the ‘fossil’ waterfall and the path that goes east, which you will use later. The Arroyo Puerto Rico stream (km 8.8) (60), the old ditch, a limestone quarry and Puerto Rico Alto, Casa de la Finca ruins (59) come after each other between the two crosses that mark the PR A-169 that comes from Marbella and continues towards Juanar. From the Golondrinas mountain pass to Puerto Rico, the Faro route and the GR-249 share the journey, although the former is going the opposite direction. Between white rock roses, an easier stretch starts towards the Hoya de los Cabañiles valley (46), where a new crossing leads to Puerto Rico Bajo and meets the PR A-169. After the Cabañiles valley, which gives its name to an old road that emerges from the Great Malaga Path, you arrive at Puerto del Acebuche mountain pass (47), in a somewhat more deforested area.

Soon, you can see a wide levelled trough; this is one of the  Peñoncillo mines, the one at the highest altitude. There is a  milestone at kilometre 10.8, just above another of the open pit mines. This is where you suddenly turn from heading north to heading east. A thin wire fence separates the forest space from the first luxury developments. The route follows the boundary of the territory for a large period of time. After successive ascents and descents next to the chalets, you reach an area of highly developed pine trees of three species: stone, maritime and  Aleppo pines.

Finally, you will see Ojén (just after a landslide of white marble from a higher-up quarry) and you will reach the burnt area. The slope is very steep, abruptly interrupted to the right by the slope of the road. The vegetation becomes spectacular in the hills that surround the Tajo Negro stream. This is the most diverse area in terms of plants along the entire route, in strong contrast to the areas affected by the fire. The pine forest with olive trees is not very developed, but the thicket acquires jungle-like proportions through a mixture of all the noble species that have appeared throughout the day. You will know you are close to the end when you reach the first water tank. You will reach the hill with the antennas, take a lane that goes down to the road, pass underneath this road and, after a series of sharp bends, reach the western area of Ojén (80) where stage 31 of the Great Malaga Path ends.